Pointer guard is documented in glibc reference materials https://sourceware.org/glibc/wiki/PointerEncryption. The mitigation provides a set of macros that mangle and demangle pointers. The API to use is PTR_MANGLE and PTR_DEMANGLE. For example, if an application wants to store a function pointer in *stored_ptr, they could use the following:

The pointer mangling works by XORing the pointer with an internal 64-bit secret, then performing a bitwise left rotatation of 0x11 bits (on x86-64). Demangling is the reverse.

After I tweeted the requirements for this attack, I was linked to http://binholic.blogspot.com/2017/05/notes-on-abusing-exit-handlers.html. This is similar attack to the one I present with some specific differences. Interested readers are advised to review it.

The attack is essentially a known-plaintext attack against the mangling operation. If we know the original pointer and its mangled version, we can recover the 64-bit secret.

Let's grep -rw PTR_MANGLE glibc/ --include '*.c' and examine each reference. I can quickly see an interesting use: 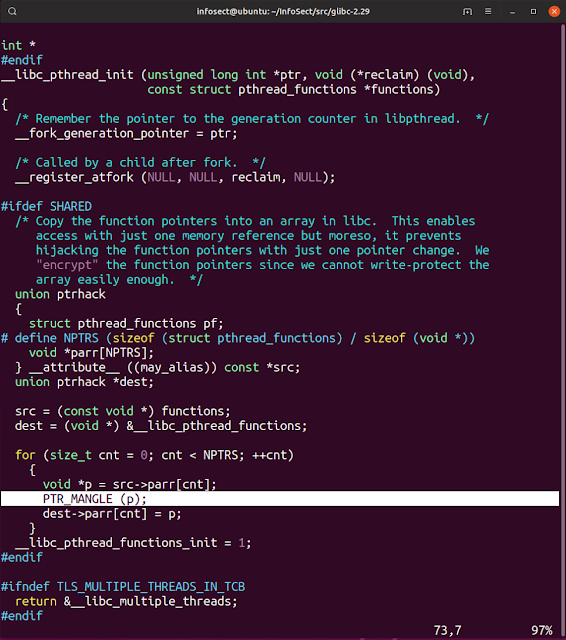 In thread initialization, we can see a function pointer table at a fixed address (__libc_pthread_functions).

If we examine what the first entry of this function pointer table, we can see that it points to __pthread_attr_destroy.

This is enough to defeat pointer guard if we know the library base from an ASLR leak. This is shown in the following pseudo code.

I write some test code to recover the cookie in a multithreaded application, and then i take the results of:

In GDB using the GEF debugging plugin, I use pattern-search to find any such memory in the address space that has stored one of these mangled pointers with known plaintexts (pointers).

__libc_pthread_functions[1] in my particular application has a mangled NULL pointer.

To defeat pointer guard then after program initialization, given the address of __libc_pthread_functions, is:

From this point, an attacker can safely and correctly mangle their own pointers.

In this blog post, I presented an attack against the pointer guard exploit mitigation in Linux's glibc. The bypass requires the base address of libc and an arbitrary read.

February 11, 2021
Jayden Rivers @Awarau1 Introduction On January 27th 2021 Qualys released a report on a bug they had found in the commonly used Unix utility: sudo . The bug had been present in sudo for nearly 10 years. Their report, which can be found here CVE-2021-3156: Heap-Based Buffer Overflow in Sudo (Baron Samedit) | Qualys Security Blog , outlines the root cause and three possible methods of exploitation. Here, we give a brief overview of the relevant workings of sudo. Then we discuss the vulnerability as well as one possible exploitation method in depth. The details of exploitation will focus on our application of the technique known as “heap grooming” or “heap feng shui”. Lastly, we outline the fix.    Sudo (utility) Sudo, or “superuser do”, is a widely used utility which assists people in administrating their Unix systems. Many Unix derived operating systems have sudo packaged by default.  According to the sudo manual , “sudo allows a permitted user to execute a command as the superuser or a
Read more